Church Response to First Step Down the Slippery Slope

Artificial Contraception: The Very First Step Down the Slippery Slope.

If a single date could be identified as the historical break with traditional Christian and Jewish pro-life values if one desired to highlight the West’s very first step down the slippery slope it would be August 14, 1930.

Until this day, all Christian churches were unanimous in their opposition to artificial birth control, notwithstanding the usual small group of loud dissenters.

However, the very critical first crack in the wall happened at the Anglican Bishop’s Lambeth Conference of 1930. Just as the ‘hard cases’ were used to obtain abortion on demand and just as they are now being used to lobby for euthanasia on demand they were used sixty years ago to get artificial birth control.

The historic Anglican Bishop’s Resolution 15 of August 15, 1930, passed by a vote of 193 to 67, reads as follows. Those who examine this statement carefully will clearly recognize the familiar semantic tools of the pro-abortion movement. Notice that Resolution 15 sounds smooth, firm, and compassionate. Notice also that it places no real limits on the Christian, but instead leaves any action at all up to him and his conscience.

Where there is a clearly felt moral obligation to limit or avoid parenthood, the method must be decided on Christian principles. The primary and obvious method is complete abstinence from intercourse (as far as may be necessary) in a life of discipleship and self-control lived in the power of the Holy Spirit. Nevertheless, in those cases where there is such a clearly felt moral obligation to limit or avoid parenthood, and where there is a morally sound reason for avoiding complete abstinence, the Conference agrees that other methods may be used, provided that this is done in the light of the same Christian principles. The Conference records its strong condemnation of the use of any methods of conception-control for motives of selfishness, luxury, or mere convenience.

Notice that the allowable ‘methods’ are not defined by Resolution 15. Notice also that the term ‘Christian principles’ is not defined. Using the statement above, abortion and even infanticide could easily be justified if the “conscientious” individual thought that the child would be a burden or an inconvenience in any way.

This is a profound and rapid change from the statements promulgated by the Lambeth Conference as recently as 1908 and 1917, which labeled artificial contraception as “demoralizing to character and hostile to national welfare.”

The Break in the United States.

The United States’ Federal Council of Churches (now the National Council of Churches) had been eagerly waiting for someone else to take the lead on ‘modernizing’ the Church’s stand on birth control. In March 1931, it endorsed “the careful and restrained use of contraceptives by married people,” while at the same time conceding that “serious evils, such as extramarital sex relations, may be increased by general knowledge of contraceptives.”

The Prophets Speak Out.

The reaction of many people to the above statements by the Anglican Church and the Federal Council of Churches was immediate and forceful. In the early 1930s, priests and ministers from the Catholic Church and other denominations were not afraid of being labeled “judgmental,” “backward,” “bigoted,” “narrow-minded,” or “out of touch with mainstream American society.” Half a century ago, the churches had not given up their right to be a forceful voice in the public square, and were not intimidated by atheist groups into silence.

These churches predicted that easy access to artificial birth control would lead to abortion and the destruction of the family. It is fascinating to read these 60-year old statements by major Christian churches and the secular press, and to realize how precisely current events have fulfilled their prophecies. The writers, all experienced students of human nature, understood the ‘slippery slope’ concept, and also clearly recognized that we had taken the irrevocable first fatal step. The pro-contraception stand by the Federal Council of Churches was condemned by virtually all major churches, as shown in Figure 98-1.

Birth Control, as popularly understood today and involving the use of contraceptives, is one of the most repugnant of modern aberrations, representing a 20th century renewal of pagan bankruptcy.

The whole disgusting [birth control] movement rests on the assumption of man’s sameness with the brutes … Its [the Federal Council of Churches] deliverance on the matter of birth control has no authorization from any churches representing it, and what it has said I regard as most unfortunate, not to use any stronger words. It certainly does not represent the Methodist Church, and I doubt if it represents any other Protestant Church in what it has said on this subject.

Its [Federal Council of Churches] recent pronouncement on birth control should be enough reason, if there were no other, to withdraw from support of that body, which declares that it speaks for the Presbyterian and other Protestant churches in ex cathedra pronouncements.

In order that she [the Catholic Church] may preserve the chastity of the nuptial union from being defiled by this foul stain, she raises her voice in token of her divine ambassadorship and through our mouth proclaims anew: any use whatsoever of matrimony exercised in such a way that the act is deliberately frustrated in its natural power to generate life is an offense against the law of God and of nature, and those who indulge in such are branded with the guilt of a grave sin.

AND THE SECULAR PRESS:

Carried to its logical conclusion, the committee’s report, if carried into effect, would sound the death-knell of marriage as a holy institution by establishing degrading practices which would encourage indiscriminate immorality. The suggestion that the use of legalized contraceptives would be “careful and restrained” is preposterous.

Excerpt from Chapter 98 of the Pro-Life Activist’s Encyclopedia published by the American Life League. 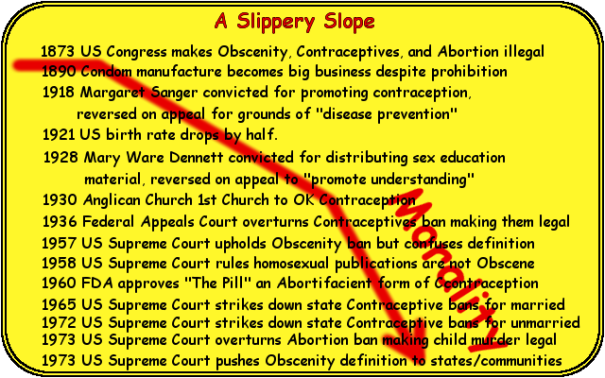